Angular has come out with some amazing new features in version 6.0, especially in Angular-CLI. This is a major release focused more on the toolchain.... 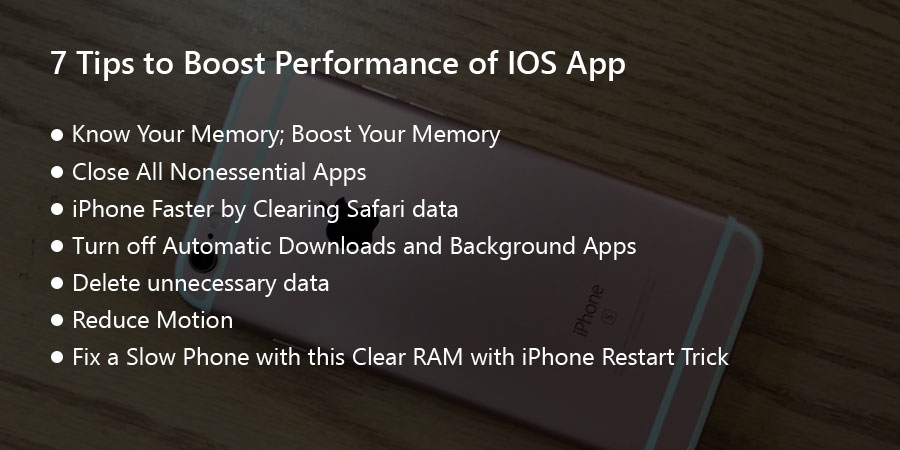 Do you have your business purpose and oriented iOS based application? To have the presence is beneficial only if its speed, features and performance meets the users’ expectations. Features and functionalities including sometimes leads to make the app size heavy which leads to lots of loading time and occupying space in the devices – may users bounce back due to this. Below are smart quick tips to get rid of the performance issue in iOS application.

The first easy thing needs to do, in order to improve the performance in your application, is (whenever possible) to:

If you have views that have no transparency defined (opaque view) — you should set their opaque property to YES. Now the question arise is WHY to do so? – Reason – By doing this, it will allow the system to draw your views in an optimal manner. This is a property that can be set in both Interface Builder and code.

On static screens, setting the opaque property won’t be a big deal. If view is embedded in a scroll view, or is part of a complex animation, not setting this property will definitely impact the performance of your app!

2. Do Not Block Main Thread

One most important thing to learn when developing for the iOS platform is to never block the main thread. If you are blocking the main thread with a long running operation, such as downloading images or other resources, your application will become unresponsive as long as the operation isn’t completed. Keep practicing and make it a habit to move long running tasks to a background thread.

With the introduction of Grand Central Dispatch, writing safe multithreaded code has become a lot easier. Take a look at the following code snippets –

Note: Every UI update must be take place on main thread. Also, for API calling we recommend you to use third party library AFNetworking.

3. Minimise the load of work done in functions called continuously

Functions like cellForItemAt indexPath or scrollViewDidScroll are called continuously, so they must be very fast.

Always make sure to have the “dumbest” views/cells as possible, with configuration method(s) that are always very light. (E.g. no layout constraints involved, allocations of objects etc.)

When we have to deal to specific properties of our UI Elements, we may have some off-screen rendering issues, due the fact that we need to prepare those elements before presenting them. That means in other terms a heavy use of CPU and GPU.

Below is a very typical example regards the use of the cornerRadius property. If you have something as below in your app:

If you’re retriving an image from the app’s bundle in a UIImageView, make sure that the image and the UIImageView are same size. Image scaling can be expensive, especially if your UIImageView is embedded in a UIScrollView.

If the image is downloaded from a remote service, sometimes you don’t have control over the size, or you might not be able to scale it on the server prior to downloading. In these type of cases, you can scale the image manually once you’ve finish downloading it — preferably on a background thread! — After use the resized image in your UIImageView.

Some objects are very slow to initialize — DateFormatter and Calendar are two examples. However, avoid uses of them will not be always possible such as when parsing dates from a JSON/XML response.

To avoid performance bottlenecks when working with these objects, try to reuse these objects if at all possible. This can be done by either adding a property to your class, or by creating a static variable.

Note that if you choose the second approach, the object will remain in memory while your app is running, much like a singleton.

Also remember that setting a DateFormatter’s date format is almost as slow as creating a new one! Because of that, if you frequently need to deal with multiple date formats in your app, your code may benefit from initially creating, and reusing, multiple DateFormatter objects.

7. Release all references belongs to viewcontroller

Furthermore, there is a class called ModelObject, which has a delegate object of typeModelObjectDelegate. Once the SecondViewController’s view is loaded, the controller sets itself as the delegate of the ModelObject: import Foundation

Let’s take a look at the objects. Once the SecondViewController is loaded, it looks like this:

Now, if the SecondViewController is dismissed, it looks like this:

The Trick
The trick to discover these kind of problems is the following: If an object gets deallocated, thedeinit method will be called. So just print a log message in the deinit methods of your objects:

Here if we dismiss the SecondViewController, there are no log messages in the debugger! It means they are not reallocated, so something is going wrong.

The Solution
As we know already that there is one strong reference too much. So let’s change  delegate to a weak property:

Here because of just one strong reference between the SecondViewController and the ModelObject, we expect that there will be no problems anymore. And indeed, the following log messages appear in the debugger, if we dismiss theSecondViewController:

How to develop Custom Component In React Native?