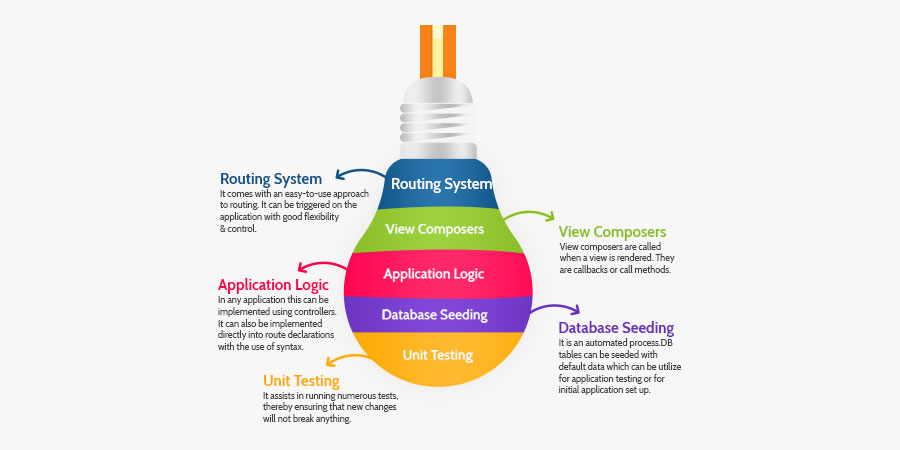 Laravel has been the big buzzword of the PHP community over the last couple of years. Let us try to explore this clean and classy web framework. Laravel Framework is a modern web application framework that designs customized web applications quickly and easily. It describes itself as a “A Framework For Web Artisans”.

It follows Model view controller which makes it more useful than PHP. It attempts to take the pain out of development by easing common tasks used in the majority of web projects, such as authentication, routing, sessions and caching. It has improvised web development experience in PHP by a ton. One important aspect of using Laravel is that the developers will not find the problem of spaghetti coding and are offered a trouble-free syntax.

Happy developers make the best code. To this end, its authors have attempted to make Laravel as a cocktail of all the good features from important frameworks like Ruby on Rails, ASP.NET MVC, and Sinatra. It is generally considered “PHP on Rail”. Laravel helps to secure your web application by protecting against three serious security risks: SQL injection, cross-site request forgery, and cross-site scripting.

This unique framework has grown big in just two years with latest versions. It has widespread good coding in all PHP projects. Laravel is probably the only framework that can make PHP code look very beautiful and developers are enjoying using this easy framework. It has a unique architecture, where it is possible for developers to create their own infrastructure that is specifically designed for their application. This may be most beneficial to large projects such as content-management-systems.

Here we will discuss some exceptional features of Laravel that makes it the PHP Developer’s first choice.

In addition to the above features, some other major features include bundles, eloquent ORM, query builder, restful controllers, migrations, class auto loading, automatic pagination and a host of others.

This framework has a unique architecture, where it is possible for developers to create their own infrastructure that is specifically designed for kind of application. It has a huge community more than 320 members active and helping each other out all the time and the framework itself is a piece of art.

Laravel has become the new, snazzy framework which gives bored PHP developers a new way to do things. It is light and very intuitive framework. You can build everything on the fly. Also the great community behind it is very big plus. The framework is still young, as of March 2015, Laravel is regarded as PHP framework for web artisans. If you haven’t tried out this superb framework yet, now is a perfect time to delve into it.