Next article
The future of Mobile App Development

The future of mobile app development is certainly bright and full of interesting prospects. Mobile apps have become vital parts of people’s lives and thus... 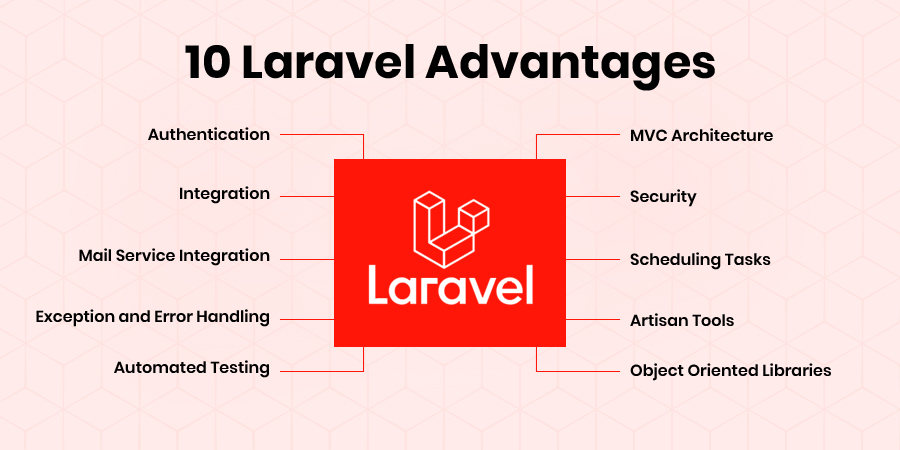 1. Overview of the Laravel Framework

As a clean and classy PHP framework for web development, Laravel is taking the PHP community by storm. Now, PHP developers are about to experience the next renaissance of the most popular server-side language of the web.

Laravel is a classy and clean framework for PHP web development. Freeing one from spaghetti code, it helps build wonderful web applications using expressive, but simple syntax. Development must be a creative experience that a developer must enjoy, instead of something that is painful.

2. Laravel is Taking the Php Community By Storm

Laravel actually makes PHP fun again and even better. Thanks to Laravel Development, the PHP developers are about to experience the next renaissance of the most popular server-side language of the web.

2. Some Advanteges of Using the Laravel Php Framework

Proficient web developers opt for the best technology solutions for web apps. It could be a pre-built web framework or CMS like Laravel. The following are some of the top benefits of using Laravel for web development.

Every web applications owner needs to make sure that users are who they claim to be and therefore prevent unauthorized users to access the secured resources. Laravel framework makes authentication implementation very straightforward. Nearly everything is configured out-of-the-box. The framework also provides a simple way of organizing authorization logic as well as control resources access.

It is necessary not only to build an app but to create a fast one as well, which would result to revenue acceleration. Integration with caching back end often is one of the major steps taken to boost the performance of a web application. Laravel framework supports popular cache back-ends, such as Redis and Memcached out-of-the-box. By default, the Laravel framework is configured to use file cache driver that stores cached objects in a file systems. It is even possible to configure numerous cache configurations.

Mail service could be used for sending notifications to emails of users after different events. It is difficult to imagine a modern web app, for instance which lack even a simple email notification to a new user regarding their successful registration on a site. The framework offers a simple, clean API over the famous SwiftMailer library. It also provides drivers for Mailgun, SMTP, Mandrill, Amazon SES and more, enabling an app to quickly begin sending email via a local or cloud-based service. It provides support for sending notifications across various delivery channels, such as SMS and Slack.

The manner in which a software app handles errors could have a huge impact on user satisfaction as well as an app’s usability. The absence of proper error handling, a user may decide that the issue is in the app and move away from it forever. Nobody wants to lose customers or disappoint them. With the Laravel framerok, error and exception handling is configured already for any new Laravel-based project. Additionally, it is integrated with the Monolog logging library that offers support for various powerful log handlers.

Automation testing work. Without testing and verifying what a developer has built, in what way could anyone make sure that the software would do without any bugs, errors, crashes and in adherence to the initial app requirements? Automation testing is less time consuming and in most instances more exact compared to a manual one. Laravel is created with testing in mind. As a matter of fact, support for testing with PHPUnit is included out-of-the-box. It also ships with convenient helper methodologies, enabling expressive testing of apps.

MVC stands for Model View Controller. It separates of business logic code from presentation code. Such separation allows HTML layout designers to easily change the look of a webpage without interacting with developers. Possible feature requests and bug fixes will be done through web developers faster if all programming code of the app has the right separation at the early part of the development phase. Since Laravel is an MVC architecture, separation is done already.

Vulnerabilities in security go hand-in-hand with developing any web app. OWASP Foundation, a non-profit American organization describes the most vital web app security vulnerabilities, which include cross-site request forgery, SQL injection, cross-site scripting and more. A developer should not forget and should be able to fix everything before delivery. Laravel helps secure the web app through shielding it against the most serious security dangers. The code base is guarded fanatically, and the code has been vetted by several individuals.

Whether it’s important to send out emails to subscribers every morning or automatic database tables cleanup at the end of the day, any web application needs a task scheduling mechanism to handle the tasks when it’s time. Before, developers generate a Cron entry for every tasks they have to schedule them, but this is a headache. The task schedule is not in source control anymore, and developers should SSH into the server to add Cron entries. The command scheduler of Laravel allows expressive and fluent defining of command schedule within the framework itself, and only one Cron entry is required for the server.

Laravel developers had to develop and manage the laravel project environment and for that, they would need a command line. Laravel framework provides just the right integrated command-line tool named artisan. It is used to build database architecture, migrations, and skeleton code. All of these would make it easier for the developer to manage the database.

Artisan command-line tools allow you to create basic MVC files and customized commands. With the help of this tool, you can perform all kinds of repetitive programming tasks that most developers try to avoid doing manually. Artisan tool also enables you to conduct Unit tests for your applications.

Developers can get on with the laravel app development just like that. It is a real-time saver. The development technology provides a wide range of tools and features that will help you build your website for you which will be easier to manage too. The things we discussed here in this article are just like the tip of an iceberg. Some reasons and advantages of Laravel makes the PHP framework one of the best development frameworks. Allow me to give you some other examples:

Taylor Otwell, the developer of the laravel framework says that:

“Laravel is the strongest contender in the PHP ecosystem simply because it includes the features needed to build modern web applications”.

And I believe he is right. Laravel development framework is indeed one of the top technology frameworks. It also has an extensively large online, strong community support. It is one of the PHP frameworks that offer a wide range of renowned features and valuable attributes.

If you are thinking about web application development then Laravel has the creative logic of the developer combined with the various strategies to find and fix the bugs. It is a scalable web development framework that can help you deliver digital solutions meeting all the requirements within a predetermined timeline and in a cost-effective manner. It is about time you select a laravel development partner for your next software project and take the benefits of the laravel framework to accelerate the growth of your business.